As the season winds down, less people will be out on the water, allowing you more freedom to fish wherever you like.  We still have availability for guide trips so please let us know if you are interested.

Currently we are having our best luck fishing small beatis patterns, both dries and emergers.  Most of our trips recently have focused below Platoro, as the fish are stacking up in the deeper slots and holes due to the low flows.  Now more than ever, delicate, precise casts are a MUST, as well as a drag-free drift.  Using annelids and midge larva as droppers has also been effective.  Here are some pics of recent guide trips: 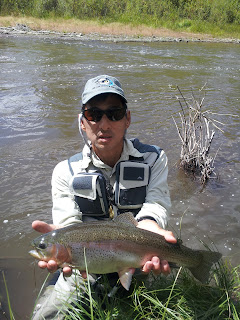 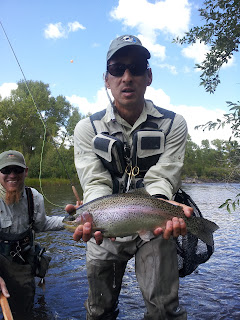 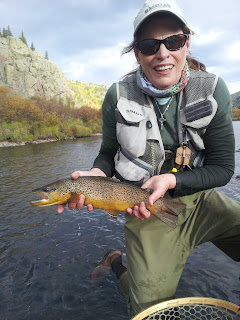 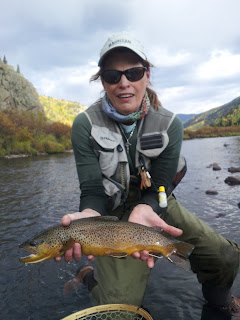 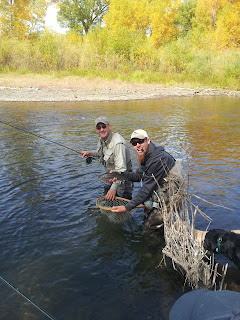 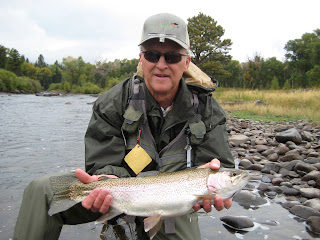 A day in the life of a guide....well maybe on the Front Range...

I can honestly say that this morning was the first morning convincing me that fall is starting to make it's appearance.  Yes leaves have been changing colors further upstream, but for some reason waking up  after hours of a drizzle last night, to fully overcast skies and temps around 50, I believe it is here.  Around here all of us have been waiting to say the word 'fall' as if it would curse us just like if you whisper the four-letter 'W' word (wind) on a peaceful day.  Thankfully, looking ahead to the next 10 day weather forecast, it will be welcomed by the fish and fisherman alike.  Highs merely reaching 70, but more like mid-60's will be perfect for fishing throughout the river in the weeks to come.  Nighttime lows are now dipping into the 30's and 40's around the lower river and dipping below freezing up high.  Here is Thursdays's forecast for Platoro from NOAA (note the first mention of snow):


Flows are definitely lower, creating both advantages and disadvantages for anglers.  Some benefits are that you have a good idea where the fish will be sitting/holding throughout the river, as well as have the opportunity to make mental notes about the structure of the river for when you return during higher flows.  Some disadvantages include the fish becoming more aware of their surroundings, thus more spooky.  This time of year, anglers cannot afford to make sloppy casts, line fish or have their flies dragging.  Thankfully, most of the pocket water is easily accessible right now, and you can slowly work your way up the main river high-sticking with little to no line on the water.  Sight fishing is at its best right now too, which always makes the blood pressure increase as well.

Tributaries are still fishable, but they are losing some of the volume as well.  The same rules apply to perfect casts and/or finer and longer leaders if necessary.

Jon and Troy have both been out fishing for Pike and Carp with some success lately.  If you are into trying something new, definitely give it a shot just East of Antonito.  Stop in and we will get you set up for some hook-ups.

Overall bugs are much smaller so make sure you stop in to match your selection with the section of river you will be fishing.  In general, BWO's, beatis and midges make up the majority of the action.  Fishing small dries, #18-22 and emergers/nymphs will pay off.  You can still get them to come up to larger dries in the afternoons so having hoppers and stimmys is a must.

We hope to see you soon, enjoy the pics! 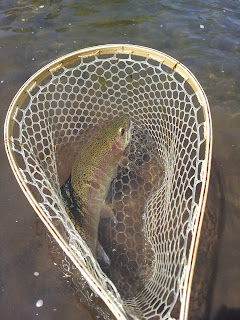 Funny video from the guys in Boulder


Thanks to the guys at Rocky Mountain Anglers!  Funny Video.
Posted by CRA at 2:00 PM No comments: 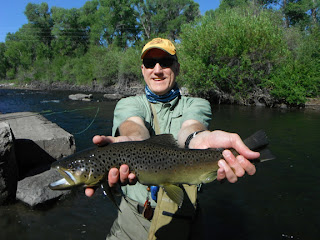 The nights are definitely getting a bit chilly, and the fish are responding well!  We have been thankful of the cooler temps lately, and fishing throughout the river has been great.  The temps are still heating up in the daytime, so focus on the lower river in the morning and plan to move up a little bit to find some cooler water in the afternoon.  Not only have we been fishing the main river, but we are taking advantage of lower water on the tribs as well as venturing out to check out some high alpine lakes.

We have been seeing plenty of BWO's and beatis on the river, so throwing small patterns such as Parawulff Dennis Adams and BWO's, Adams Superfly and hanging RS2s, Barrs emergers, or Juju Baetis underneath has been a good approach.  Having an assortment of small midge larvas will pay dividends too.  Flashbangs, zebras and double digits do the trick.  Some days the fish are even tuned into larger stonefly nymphs so don't put away those pat's and Jimmy legs just yet.

Throughout the river, attractor dries and terrestrials have been very effective in the late morning/afternoons.  Hoppers, beetles, ants, stimmys, PMX's are staples.

The tributaries are getting to be a little skinny, so get out there if you have the itch.  Attractor dries still turn fish consistently as well as small terrestrials.  Hunting season has started as well, so before we know it those leaves will be turning yellow, some snow will arrive and we will be remembering the glory days that were summer.

Here are some pictures justifying why you need to get out there! 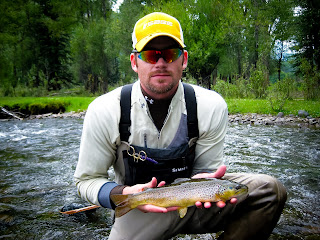 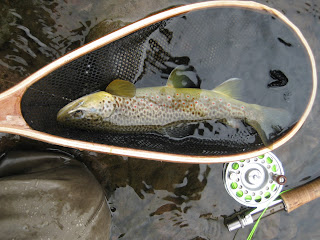 Summer is here in full force and so is the realization that August is upon us.  Guide trips have been busy lately and the fishing has been good, so long as you target the right stretch of water.

With the lower flows and higher air temps, the water temperature has been rising quite a bit throughout the day.  As you are all aware, trout are cold water fish, so these rising temps play into your tactics quite a bit.  A good rule of thumb is to carry a pocket thermometer with with to check the temp while you are fishing.  Trout will typically eat as the temp gets closer to 68, and will occasionally eat when it is higher.  The problem that results is that with the higher temperatures, there is a lower dissolved oxygen concentrations which lead to very stressed trout.  Do everyone a favor and hang up to rod and move up river when the temperatures reach the 69-70 degree mark.  Not only will the fish will be much more active in lower temperatures, but you should increase the number of hookups as well.  If not, you may be releasing some floating fish.

That said, early the is the name of the game recently.  Plan your days so you can be on the water earlier rather than later, and you can get off the water during the heat of the late afternoon.  Also, think about the colors you are wearing before you head out.  You may have been able to get away with the red hat or orange fishing shirt while the water was higher, but those fish are boogieing as soon as they see something unnatural now.

On the lower river small mayflies, terrestrials and attractors have been the ticket for dries.  For nymphs use small stone imitations such as a Salvation #16, or Pat's Rubber Legs in lighter colors.  Mayfly nymphs such as a Iron Lotus and Oops have both been productive as well.  If you find the fish still refusing your offerings, throw some smaller emergers such as Barr's Emergers, and Flashbang Midges.

Below the Meadows:  This pocket water has been fishing fairly well recently.  We have been using a dry/dropper set up almost exclusively with the excepting of nymphing deep in the plunge pools.  There are many smaller adult mayflies that are hatching throughout the morning.  PMD and BWO patterns #16-20 are effective.  Yellow Sallies are also fluttering around and coaxing some fish to the surface.  For the nymphs, bring s wide selection of both attractors as well as natural imitations as the fish seem to change their minds often on which they prefer.

Meadows:  Fish early and break out the 6X.  These fish have earned some college credits this season and are onto the 5X game.  Precise, delicate casts and slow movement through the water will keep these spooky fish from fleeing.  Small mayflies and some small hoppers are taking fish on top.  Underneath try using some Zebra Midges, Flashbang Midges, Tailwater Tiny's, and other small midge larva.

Hope that helps, let me know here in the shop if you have other insights.  As always, I love getting reports from you all so stop in the shop after the trip and let me know how it went.   -Joe
Posted by CRA at 2:39 PM 1 comment:

Fishing 101: Info EVERY fisherman should know

Alright, it is that time to remind everyone of the unwritten rules you choose to abide while you are enjoying your day on the water.....Fishing Etiquette.  As more and more anglers get out there this summer, it is important for everyone to be on the same page when it comes to sharing the water.  Here are some thoughts to keep in mind from all of our guides who spend everyday out there:

It is as simple as that, so remain courteous and you will be blessed with some good fishing karma.  If not, you will most likely get a flat tire in a rain storm after being skunked.  Tight lines!